I had an idea for a crafty project early this morning and on my way through the garage to my studio to grab some Mod Podge, I nearly tripped over an old box I’ve kicked around for years. I used to think it was some kind of ballot box because of the slits in the lid, but when dusting it out this morning I found a nail wedged inside. Hmmm, possibly it was some kind of nail sorter/storage. Either way, it wanted to be a part of the crafty action, so I grabbed it, the ’Podge, an old tattered book and my trusty X-acto knife.

Before starting my original project idea, I went to work on the box and lined the back of each compartment with a page piece glued down with Mod Podge.

Now, as you may know, if you collect enough stuff, eventually things just start to partner up.
I was observing spools and labels sitting together on my coffee table just this morning; some of the spools from my old thread stash and a few I bought for ten cents yesterday at The Legacy…

and vintage cigar bands, part of an Etsy order that I found in my mailbox when I returned home with the spools.

I wasn’t quite sure what I was going to do with the bands when I ordered them, it was an impulsive add-on to another purchase, but thought they would be a nice addition to my cigar label collection. And by the way, these fantastic cigar labels and wraps, found on eBay and Etsy, are very innexpensive.
After staring at them long enough over coffee, I had an Aha moment. The next thing I know I’m wrapping spools with cigar bands. 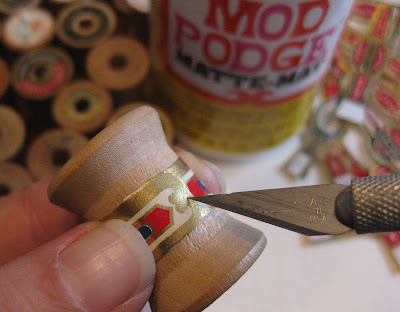 The wrapped spools fit nicely into the old compartment box and I added some cigar box labels to the piece as well. I wrapped a few other spools that still had their thread and the whole project created a really cool general-store-like display, especially exciting for the graphic designer in residence. 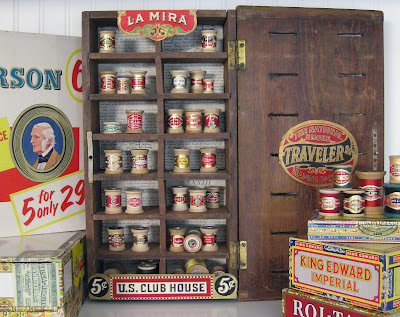 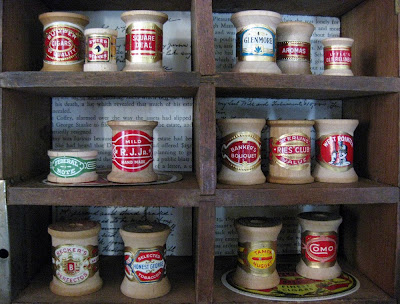 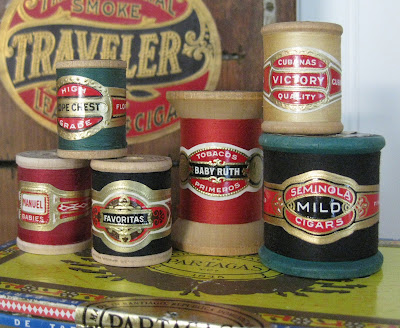