Have you ever been prompted to research family history? Well, I’ve yet to dive into my genealogy, but recently, I came across the results of my very first internet research project, an important bit of history from my father’s life. I had begun it in the Spring of 1998 and forgotten about all the work I had put into it until I found an envelope with copies of it tucked away when cleaning out my late brother’s apartment recently. I had sent copies of my findings to all of my siblings. Back when I was researching this story, I was unable to find most of the details online, but was able to find contact information for hospitals, libraries, funeral homes, etc. and called the sources directly. I realize this post has nothing at all to do with crafting or design, but it’s a story I am compelled to tell and think is quite fascinating though very sad. So many families have amazing stories to tell and most are worth researching. Here’s one of ours, it’s a bit long, so please bear with me. 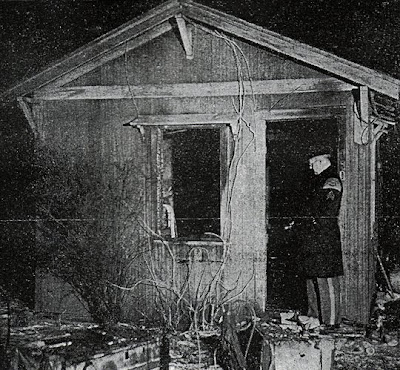 12 years ago, my dad told me that when he was a teenager, he and his father, General Drew Thompson, heard a loud explosion and rushed across the street to a tiny house engulfed in fire, broke in and pulled 5 children from the structure. However, my dad, being only 17 years old and having just joined the US Navy, was sent off to training within days of the fire, never knowing the fate of the children in the accident.

I began my research and below is the letter and newspaper articles I was finally able to send to my dad, placed in a leather keepsake album.

To my father, Allyn D. Thompson:

A few months a go you shared with me the story of when you were young of a house fire in your neighborhood that you helped pull children from. You told me that you always wondered what happened to the children and thought that they had all perished as a result of the fire. Well, as I promised, I have been researching this story for you, and for me, and I am so thrilled to finally share with you what I have found. The scrapbook contains newspaper articles from the Flint Journal, written the day after and two days after the fire. With the names given in the articles, I was able to piece together, with the help of the internet and many wonderful people in Michigan who were fascinated by the story, all of the following information.

After reading the newspaper’s account, still in question was the status of the 5th child, Charles. There was no mention of his health status past the second day. So, for the last few days I have spoken with at least 50 people in the Flint, Beecher and Mt. Morris areas who might be related to anyone involved in the story, who could shed some light on the whereabouts of Charles Burge. And, whether he was living or deceased, and if living, how to locate him. For information I have contacted hospitals, a cemetery , the driver’s license bureau, Social Security death records, libraries, every Charles Burge and virtually every other Burge listed in the state of Michigan. I have spoken with a few Lafayettes and many Mayles. So many people in very interesting ways helped bring me to Charle’s older sister, Arlene Lafayette, the mother of baby David Lee. Today I spoke with Arlene and she helped me to finally speak with Charles Burge, the only survivor of the fire, that you helped save.

Charles Vernon Burge, born April 18, 1938, is now 60 years old. He graduated Beecher High School and went into the Navy on May 5, 1955 at age 17. He served 3 years, stationed at Norfolk, Virginia. He was aboard an LSD (landing ship dock) and an AGC (flagship/communication ship that carried around the admiral). He went on to marry his high school sweetheart, Diane Chartrand, widowed with 3 young children that he helped raise. They had one son together, Charles Vernon Burge, Jr. He worked for 33 years at Stoke Steel Treating in Flint. He was a driver for the company for 15 years then transferred into the shop and shoveled steel into a furnace as an Automatic Furnace Operator for the remaining 18 years. He suffers from diabetes and has recently gone blind, therefor on disability from the steel company. He lives alone, separated from his wife of 33 years, in Flint Michigan. His sister, Arlene, looks in on him and helps him around the house. He has no physical scars relating to the fire.

Charles is a very witty man, very pleasant to talk to . I couldn’t believe how much he reminded me of you. He said he wouldn’t mind at all speaking with you if you were interested in contacting him personally. And before I finished talking with him today, he said, “Tell your father ‘Hi’ for me, and ‘Thank you.’”

I was also able to get a little more detailed information than the newspaper gave regarding the family: Mrs. Amos Burge, Mildred, had “taken off” out of state to California as I understand. She and Amos Burge did not get along well at all. She was on her way back home when she stopped half way to call to get some money forward to her to continue her trip back when she learned of the death of her children. Amos Burge worked at the Buick plant in Flint, so the children would go to their older sister’s house (Arlen Lafayette), after school as there would be ono one at their home to care for them. This may better explain the children’s presence at the Lafayette home, although it too can be assumed, asit states in the article, that Amos took them there later due to fuel shortage to heat their house.

One neat thing that happened while speaking with people in my search was that I spoke with a woman Named Sherrie at Hurley Hospital in Flint. Before I could get too far into my story regarding my research project, she told me that she had spoke with my father once, sitting on a bench in a mall in Flint. She remembers that you were there and some children were playing near which prompted the two of you to strike up a conversation. You told her the story of the fire and how you always wondered what happened to the children. She never forgot that. What a small world.

So there you have it, some closure I hope. You know, Pop, I have always been proud of you, even before hearing this story. I can only imagine how this mush have affected your life at such a young age, and how you have carried it with you this long. It’s a sad, yet joyful 5o year anniversary of the day you’ll never forget. I am so proud to have this piece of history to share with my children. I love you, Dad. Thank you for sharing this part of you with me. 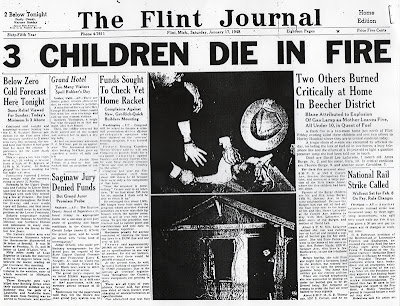 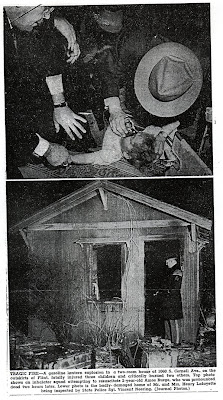 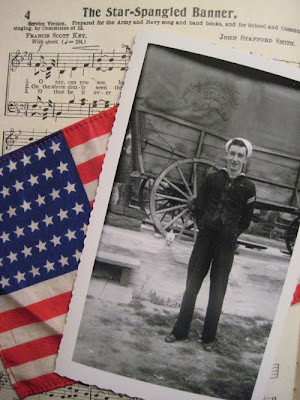 My beloved dad, Al, now 79, lives with his adoring wife, Judy, in Texas. This is a photo of him as a very young man in the Navy.

What family story could you research?

This entry was posted in Uncategorized and tagged Family History. Bookmark the permalink.